New boat can either fly or sail. Towed by a powerboat, this craft takes to the air under its flex-wing sail.

On its own with the wing tilted to catch the breeze, it sails like a catamaran. A plane type stick controls the wing in flight; rudder pedals steer the boat on the water.

Return To Inventions In the Last 100 Years

How do they take those movies of skiers winding down the slopes? Professional photographer Red Allin does it this way. He attaches his camera to his helmet (for a total weight of 18 pounds) and takes his pictures while skiing with his subjects.

He is shown at Mount Snow, Vt., while shooting a ski-safety film for Aetna Life Affiliates of Hartford, Connecticut.

In modern times you would probably use a Go Pro such as this one sold on Amazon (affiliate link).

Back in April 1963, this midget scooter was built for transportation, fun or a combination of the two.

It was able to squeeze 125 miles from a gallon of gas and can speed along at 35 miles per hour while doing it.

Known as the Wren it had a 38-inch wheelbase, weighed 62 pounds, and used to cost $100. The clutch fitted to the scooter was an automatic centrifugal one and it used to be manufactured by Bird Engineering in Omaha.

Light up and listen to your favorite music with this miniature radio-lighter combination, only slightly larger than an ordinary lighter it contains a two-transistor radio with built-in antenna and battery.

The radio comes on when you plug in the earphone. The standard mercury cell battery makes the device last for about two-hundred hours.

In modern times you’d probably be best to think about your health and avoid the cigarettes completely and just stick with the music! You can purchase a miniature radio that should do the trick just fine on Amazon. (affiliate link)

Inventions In The Last 100 Years

Back in 1963 a laser cutting wood was one of the latest innovations. The University of Michigan had developed a tool to cut through maple and other hardwoods.

It builds up intensely hot light pulses, focuses them through a lens to vaporize a hole in a block of wood instantly, without leaving any char or burn marks.

It was thought that one day such laser cutting wood devices wood be readily available for the home DIYer to use in his or her home workshop.

I am not sure whether home DIY laser woodcutters are available in modern times however you can purchase laser engraving machines that can engrave on wood, for example, this one from Amazon (affiliate link).

Go To Inventions In The Last 100 Years

The latest thing to hit the jukebox-set at taverns and bowling alleys is movies: three minutes of sound film for a quarter. The screen looks like any 21-inch television set; the console under it resembles an ordinary jukebox with individual panels listing forty titles and a slot for your coin. 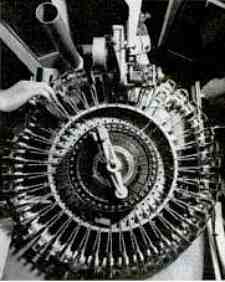 You make your selection on the Cinebox, insert your coin, press the starter button, then sit back and enjoy the feature. A storage reel spins to the selected film. Threaded on a projector, it’s reflected on the back of a rear-projection screen through a system of mirrors.

Cinebox was developed in Italy and marketed by Cinevision Corporation, Hicksville, L.I.

Go To Inventions In The Last 100 Years

In water sometimes no deeper than three inches, this 42-foot boat will cruise at 25 m.p.h. with 55 people aboard.

Propelled by two Berkeley jet pumps powered by a pair of 409 Crusader engines, it makes daily runs down the Colorado below Moab, Utah, where the water is too shallow in places for prop-drive boats.

Indoor golf with outdoor view. A giant color picture of a fairway flashes on the backstop net as in the picture above.

The golfer does a full swing and slams the ball into the net. Next a microphone picks up the sound and starts a computer, which works out where the shot would have gone. This in turn tells a Kodak projector which of eighty scenes to project next.

These early golf simulators were named Golf-O-Tron and were made by S & M Products.

With todays advanced computer technology, much more advanced simulators exist such as this one listed on Amazon.

The small wheel bike was invented by British designer Dr. Alex Moulton back in 1963. At the time it was thought to be one of the biggest bicycle design changes in over seventy years.

The bicycle had sixteen-inch wheels and an ultra-rigid frame of oval tubing. Many of the modern-day folding bicycles have this kind of small wheelbase.

The bike had substantial luggage space and an adjustable saddle that could be adjusted to fit people of varying heights. The small wheels lowered the center of gravity and the long-wheelbase gave the bicycle increased stability.

Tires could be inflated to a rock hard sixty pounds to reduce resistance to roll and rubber springs were fitted to act as a suspension mechanism – smoothing the bumps out of the roughest of roads.

This bicycle was originally made by Moulton Bicycles Ltd who are still in business to this day and are located in the United Kingdom at Bradford upon Avon.

At the time they made five road and racing versions of the bike. Today they still specialize in the small wheeled bike and their tag line is “The Moulton Bicycle is the original full-suspension, separable, small-wheeled, high-performance bicycle, world-renowned for speed, efficiency, durability, and comfort.

Expertly engineered for over 50 years and handcrafted in England, these bicycles are the world’s most efficient form of transport – designed for universal use, real performance and comfort.” – Moulton Bicycle company

The original designer of the small-wheeled bike was Alex Moulton which included an excellent suspension, a unisex frame.

The modern day equivalent of this bicycle is lighter, stronger, faster and much more comfortable but remains easy to transport and extremely innovative.

Look closely at the picture above and you will notice that there is no pilot in the cabin of this “bailed-out” eleven year old Army helicopter. Instead, it has been fitted with radio controls developed by Bell Helicopter so it can be operated by a ground unit.

It’s shown flying unmanned at 2,000 feet above China lake, California. The equipment can be put in any old copter for decoy use, reconnaissance, supplying troops, or dropping missiles on submarines.