This projector turns words into pictures.

The New York police are now using a quick-identification projector invented by one of their own members.

It puts together from coded slides a verbal description of a wanted man and projects his image on a screen where it can be photographed and distributed.

It works from slides offering 600 combinations of facial features, similar to a previous system, but with important differences. The system, unlike the earlier one, uses a projector, and in addition, has built into it a series of wafer-thin mirrors that can distort any of the features at a press of a button.

A chin can be lengthened, nose shortened, or eyes widened if a witness desires. The machine cuts the work of hours down to minutes.

Detective Peter Smith, who used to draw identification pictures, developed the machine on his own time and money and turned it over to the department without charge. 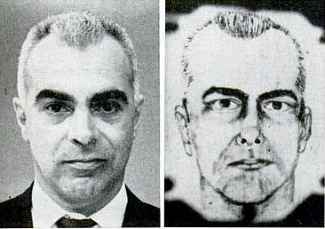