Why Inventing Is Still A One Man Job

Why Inventing Is Still A One Man Job by Lynn A.Williams first published in September 1961

One of the surprises of modern life is the relatively small contribution of large corporations to the sum total of significant creative and new ideas.

Historically, important new ideas have come through individual initiative. They have come less often from the laboratories of our great corporations.

Despite the tremendous size, power, and wealth of our largest firms, and despite the fact that they are totally immersed in technology, their contributions have been far greater in production and in marketing than in creativity.

I am convinced, both by history and by present circumstances that this is not likely to change. It will not be changed by “brainstorming” or “pyramiding.” It will not be changed by plan or organization. A disproportionately large quota of new ideas will continue to come from individuals. The large industrial giants will continue in their roles as developers rather than creators, and as producers rather than innovators.

History, sociology, and what I term “accident” account for this.

This is not to say that corporations have invented nothing. There have been important inventions by men working within American big businesses. The transistor resulted from an idea suggested by Dr. Shockley at the Bell Laboratories. Freon refrigerants came from Midgely after he went to work for General Motors. Nylon was originated by a man in the DuPont laboratories. There are others.

The modern corporation has often been superb in development and improvement.

But the creative idea is something else. It is the pregnant suggestion that sets in motion a whole series of new consequences. One consequence is the development, improvement, refinement, manufacture, and marketing of the product that rests on the idea.

For history, let’s look at some inventions familiar to us. The expansion steam engine was invented by Watt, and the steamboat by Fulton. The telegraph was invented by Samuel Morse, and the cotton gin by Eli Whitney. And, of course, Edison invented the incandescent lamp, the phonograph, and the moving picture.

The first significant breakthrough in the making of steel was by Bessemer. The steam turbine came from Parson. The process of refining and producing aluminum, still used today was invented by Hall and Cowles in the United States and, almost simultaneously, by Heroult in France.

A salesman for bottle stoppers invented the safety razor. His name was Gillette. Wireless was invented by Marconi. It was not the telephone company or General Electric or Westinghouse that invented the three-element vacuum tube. This was the work of Lee de Forest. The modern plastics industry began with Dr. Baekeland and Bakelite.

Perhaps these things are too old to be relevant today. Very well, insulin was discovered in the 1920s not by anyone in a great pharmaceutical house but by Dr. Banting of Canada. A private experimenter, Dr. Fleming, found penicillin. Streptomycin was found by Dr. Waksman, polio vaccine by Dr. Salk.

The Polaroid camera was invented by Dr. Land, whose early work on polarizing films was done when he was 20 years old and still a student at Harvard. Stainless steel was developed not by any of the major steel companies but by two scientific entrepreneurs, Harry Brearley and Elwood Haynes. The cotton picker was invented not by International Harvester but by the Rust brothers. Cellophane was not the invention of the Du Pont Company but of a Swiss-born Frenchman, Jacques Brandenberger.

In the field of nuclear development, it was Ernest Lawrence, a University of California scientist, who invented the cyclotron. The major inventions for the atomic bomb and much of the ensuing nuclear work were by individuals like Niels Bohr, Enrico Fermi, Edward Teller, Harold Urey, and Leo Szilard.

The automobile? A number of major inventions stem from ideas within the industry. The outstanding one is the automatic transmission, initiated by Thompson while he was at Cadillac and carried by him to Oldsmobile. (The hydraulic torque converter, however, was the work of individuals not associated with any large firm.) Duco body finishing was invented by Du Pont. The sealed-beam headlight came from within the industry.

But the four-cycle engine was Otto’s, of Germany, and the two-cycle Dr. Diesel’s. Vulcanized rubber was the invention of a man named Goodyear and the pneumatic tire of an Englishman, Dr. Dunlop. The self-starter was invented by Vincent Bendix, and by Kettering before he became associated with General Motors.

Four-wheel hydraulic brakes were invented by Loughead power steering by Davis, and chromium plating by Dr. Fink, a professor at Columbia.

So much for history. The second reason that the individual inventor will continue to bulk so large in our scientific progress lies in sociology.

Critics (with whom I don’t agree) have observed that the giant corporations have indulged in welfarism, particularly for the supervisory classes, to a degree beyond the dream of any Utopian socialist. They say that the brass, including many engineers, of today’s big industrial firms, is weaned, fed, clothed, schooled, doctored, and hospitalized, has his adult being in, and can be buried without leaving, the comfortable company corridor. Let him make the company’s first team, and the likelihood of his ever getting fired is remote indeed.

What has such a man to gain by propounding an original idea? Not much. His sure path to success lies in being a good little cooperator and keeping his nose clean.

So say the critics. They may expose a grain of truth in a Sahara of unrestraint. But there are at least four more valid reasons that prevent a factory from being a fertile ground for creative ideas.

The basic purpose of a factory is to produce. To produce efficiently requires planning. Planning requires deadlines, and introducing new ideas along the way disrupts them.

The oddball innovator is disturbing. His habits don’t fit into a smooth-running organization. I learned this rather poignantly when, as a division manager for a large corporation, I reached the limit of my patience with an engineer whose arrival in the morning must have been timed by a sundial in cloudy weather. 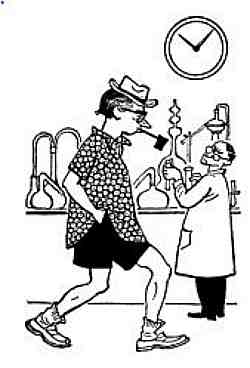 Sometimes he arrived at 10 and sometimes at noon. He was as bright as any engineer we had, and often he worked late into the night. But his unreliability was just too much.

Three years after I fired him, he had made several million dollars from one of his inventions.

Personnel-testing schemes are now arranged to screen out such men. Not every inventor, of course, insists on dressing like a Californian. But there are enough pressures and problems in a big factory without adding the disturbing nature of the oddballs’ creative contributions.

It is necessary to distinguish between some of these facts of business life and the public-relations utterances about our zeal for progress. Because of these statements, I think many commentators have been misled. The fact is that there are important pressures against innovation and that they are highly concentrated in any hard-working productive enterprise. I mean no disrespect to General Electric, which, in fact, has done a good job in creativity, when I say that in many firms “Progress is our most important slogan” – and little more.

Finally, I venture the suggestion that our big corporations don’t really need to innovate. When they do, they take risks which they can avoid by depending less upon creativity and more upon the size, momentum, organization, skill, and advertising.

We come now to the third and last basic reason why I believe our big corporations will not come to dominate creativity as they dominate the marketplace. That lies in “accident” Invention defies planning. It is simply not possible to corral into industrial research laboratories any but a small fraction of the men who contribute significant ideas.

I refer to two kinds of accidents. The first is the legendary accidental inventions – like Dr. Fleming’s observations of an unusual mold in a culture plate that turned out to be penicillin.

The other kind of accident is in the nature of the non-professional inventor. As observed by Jewkes, Sawers, and Stillerman in The Sources of Invention, George Eastman of Kodak was trained as a bookkeeper, not as a technician; Midgely was a mechanical engineer, not a chemist; the men who invented color film were not chemists but musicians; the inventor of the ball-point pen had been at various times a painter, sculptor, and journalist; Dunlop was a veterinarian, and the inventor of the dial telephone was an undertaker.

If the director of a modern research laboratory had hired this motley crew to work on the kinds of things they invented, he would have been fired.

It is important that our big businesses welcome new ideas. I find much of American business far less receptive to new ideas than the businesses of Europe.

So long as our conservatism is confined to our business organizations, I do not fear any desiccation of the well spring of creativity from individuals. The danger lies in this: The organizers, who in business keep the innovators in their place, may extend their dominion to society at large. This could lead to economic stagnation and, more important, to the atrophy of the creative spirit.

If big business comes to want new ideas, it can help itself by improving the climate for their growth within the business. It can help itself much more by opening its doors to creative individuals outside the walls.

As a lawyer, I have written some of the documents that inventors are required to sign before their inventions will be considered. I know something about the kind of reception that inventors usually receive.

I think that our corporations are lawyer-ridden. There is far more concern to avoid a possible lawsuit than there is to get hold of a new idea. This, I think, has to change.

Beyond this, I would urge the manager of any business who is really interested in new ideas to get a new crew of people to interview inventors. He should also set aside an amount of money that he fully expects to lose. If a man is never explaining his failures because he has only successes, it means simply that he is not taking enough risks.

What To Invent Word Rhyme

Now Inventing Is Easier Than Ever!