Straight Talk – Part 1: So you’ve Invented Something… Now What?

This is the Great American Dream. Particularly something that will make at least a million dollars. Lots of people realize the idea/creation part of the dream. Every week the U.S. Patent Office issues 1,000 magnificently engraved certificates attesting to it. Some of them make money. A few hit the jackpot.

George Nelson, for example. In 1940 he was a mechanic bolting down deck plates in a San Francisco shipyard. Too slow for wartime. So he created a flux-filled stud and a semiautomatic gun for welding the stud to the ship’s frame. Together they eliminated a finicky drilling and tapping operation.

One year later, however, the gross exceeded a million. In 1944 the company was sold for $15-million. Nelson’s personal share: $3-million.

So it does happen. Independent inventors-bucking the degree-loaded research teams in laboratory palaces – get two out of every five patents. More surprising, they win the lion’s share of the valuable patents. Sixty percent of the important inventions come from the loners working at home or in small companies.

Two young musicians started working on what became Kodachrome color film in the bathroom of a New York apartment; one employee of a two-bit St. Paul company invented Scotch tape; an obscure RAF officer created the jet engine; a couple of lab men at a small fabric-printing outfit in England discovered Dacron. 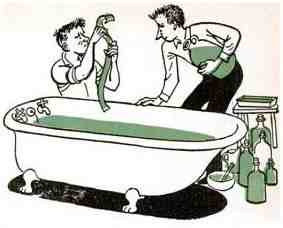 THE STAKES ARE HIGH – AND SO ARE THE ODDS AGAINST YOU

There’s a dark side to the picture, too. So many new ideas are born, and the struggle for acceptance is so fierce, that all but a very few languish and die without earning a nickel.

One respected broker, who has built a profitable business for himself by promoting other people’s inventions, confides that he serves about 1,000 clients a year. On the average, he completes a sale for three of those hopeful 1,000.

A GOOD INVENTION IS ONLY THE BEGINNING

You have to start with a good invention. (Naturally, yours is.) But that’s the small part of the job. Commercializing it requires more ingenuity and hard work than the original idea did. Today public and private agencies are anxious to help you. New products and processes are in greater demand than ever before.

At least three Federal agencies make an effort to help independent inventors: The patent Office, besides offering advice on patent procedure and a roster of patent attorneys, make a stab at publicizing inventions. When your patent is issued, it is described in the widely read Official Gazette. For $3, you can have it summarized in a special list of patents available for sale.

The Small Business Administration (local offices in several cities) gives advice and also publishes a listing of inventions for sale.

The National Inventors Council (Washington 25, D.C.) hunts ideas for the Armed Forces, which take over the development of promising ones.

BUT HOW DO YOU GO ABOUT SELLING IT?

Anyone who counts on Government listings to fix him for life with royalty checks is more likely to end up broke.

A successful inventor has to be a persistent salesman.

You can advertise your invention (wall Street Journal, New York Times Sunday financial section), but cheaper and closer to the bull’s-eye is letters direct to manufacturers (address the patent department). Your chances? A survey of top patent counsels by the industrial magazine Design News revealed this: You’ll get polite consideration from two out of three companies. However, only one in six encourages outsiders to submit ideas, and a bare 1 in 20 actively solicits them. Among the least receptive: automobile and airplane manufacturers.

CHOOSING THE RIGHT COMPANY TO APPROACH

This is probably the biggest secret of success. The pros go after firms that can sell the product, not the ones equipped to manufacture it. A leather-goods outfit will be less interested in a new idea for tool cases than a tool manufacturer. The tool company already has customers for the cases and gets somebody to make them up.

This problem solves itself if you invent an improvement for a standard product. Jacob Rabinow, the genius who developed the magnetic clutch, knew where to offer licenses for his self-adjusting watch movement (a tricky linkage automatically resets the regulator every time you correct the hand setting). Only watch and clockmakers would be interested. They were. It is now a feature of many wristwatches and auto clocks.

Things worked out differently for Walter Haskins. He was sick in bed one day but kept busy on the phone. While juggling phone directories, he thought up Redyref – the rack that suspends a row of books on a rod so that any one book can be swiveled up to flop open, atop the backs of the others. The obvious customer for this was the telephone company (for the rows of directories at busy public boots).

Haskins made his pitch and was cold-shouldered. Not only that but when he sold a few to hotels and offices the phone company angrily ordered them removed. One building owner retorted that if Redyref went, the phones went, too, winning the skirmish. But total victory didn’t come until Haskins interested W. & J. Sloane, the home-and-office-furnishings outfit. One of its big customers is AT&T. Having sold the firm that already served his ultimate consumer, Haskins had it made.

Invention brokers will take on the job of pushing your idea for you. They usually charge a flat fee plus a small commission on the sale. The honest ones (and there is plenty of the other kind) tell you frankly what they do for the fee: circularize manufacturers who might be interested, follow up on those who respond to the enquiry, and finally attempt to close a deal.

This panned out for Fred F. Cannon. A small-scale contractor, he created a post-hole digger, built a couple for his own use, and found that they saved time and manpower. As soon as the patent was issued, Cannon signed up with K.O. Kessler of Fremont, Ohio, one of the better-known brokers.

Kessler’s staff mimeographed a page-long letter describing the digger and sent copies to some 30 prospects culled mainly from a private file. Most (including the Government’s National Inventors Council) replied no, they didn’t see any great advantage over diggers already on the market.

A few were interested in a closer look. To each of them, Kessler sent a “folio”: a folder containing a Photostat of the patent, photographs of models, and a discussion of the merits of the machine.

This brought more than a nibble. Roper Manufacturing Co. had a contract to equip a fleet of jeeps for shipment abroad, and the Cannon digger was the accessory they were looking for. Cannon didn’t get rich (on this idea, anyway), but he did clear several thousand dollars in royalties.

ANOTHER WAY IS TO SET UP YOUR OWN BUSINESS

The biggest returns (and risks) await the inventor who goes into business for himself.

Dr. David Richman gave up dentistry (after an automobile accident) to sell plastic swimming pools in Florida. Then he contrived a gun that sprayed fiber-glass onto pools, boats, and molds. Two years ago he set up shop in a concrete-block building in Hialeah, investing some of his own money and raising more in small bites.

The gun is an efficient tool. Dr. Richman is a powerful salesman. He sold 100 units. The price of the units were high enough to interest Wall Street. The underwriters floated some of the stock to enable Spray-Bilt Inc. to expand its business. Dr. Richman’s original stake grew by 33 times.

Only a going concern can expand by selling stock to the public. You have to get started on money raised privately. Maxwell Mangold, the chunky, fast-talking Wall Streeter who set up Spray-Bilt’s stock issue, explains where to find that dough. Look to lawyers and accountants, he advises. They can introduce you to well-heeled citizens.

The fat cats are ready and eager to ante up because of the way the Federal income-tax laws are rigged. 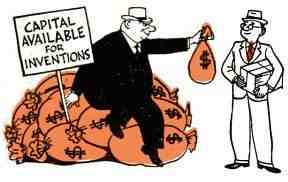 Take Mr. Gotrocks who earns so much money he is in the 80-percent tax bracket. If he places $10,000 of income in the bank, Internal Revenue will demand $8,000 of that nice round sum. Suppose instead he invests the 10 grand in your invention. Maybe the invention, a power-operated buggy whip, proves not very commercial. Old Gotrocks deducts this $10,000 loss from his tax return and is out of pocket only $2,000.

But the sweet part appears if your creation is a never-dulling razor blade, and really takes off. Gotrocks’ investment could easily double in value. His $10,000 profit would be a capital gain, taxed at only 25 percent. Now he can keep $7,500. This deal works fine for everybody: The inventor gets capital, the Government covers most of the losses, and the investor gets to keep most of his profits.

HOW MUCH CAN YOU MAKE IF YOU’RE LUCKY?

Bendix paid $649,000 plus a percentage for James Rand’s patents on the Economat washing machine (the one that squeezes clothes inside a plastic bag). Only an old pro like Rand can drive that kind of a bargain; ironically, the machine never caught on, and Bendix later sold out its appliance business.

A more realistic deal is an initial payment – against a royalty of three to five percent (on selling price).

If you beat the bushes for backing for a company of your own, you quickly find out that it won’t be your personal company. The investors and their managers expect an 80 to 90 percent share of the new fir. They take a big risk and shoulder 80 to 90 percent of the responsibility for ultimate success.

The inventor’s cut may seem small, but it can turn out to be a nourishing slice. George Nelson’s piece of Stud-Welding Corp was just 20 percent. Twenty percent of $15 million is $3 million.

Innovation Process From The Perspective Of Measurement

INNOVATION POLICY DEVELOPMENT AND THE EMERGENCE OF NEW INNOVATION PARADIGMS